I recently gave a talk in FOSDEM, which is a great event if, like me, you are into open source.

You can watch the whole talk in video format. If you prefer a text-based approach, read on.

If you want to know what Continuous Integration is, or why it is useful, you could start by reading the article I wrote about that.

I manage several open source long-lived Lua projects. I have continuous integration in almost all of them, and it has been of great help. What I am about to explain works for my kind of projects, but it can be adapted to other options.

Continous Integration takes place in a server. Since we’re talking about Lua here, the server must have a way to install some version of Lua, and some version of Luarocks. This is what I call “the environment”. I want to test my libraries in Lua 5.1, 5.2 & 5.3, as well as LuaJIT 2.1 & 2.2. So I need my CI server to install all that.

I choose travis-ci as my main CI server. It is free for open-source tools, and it integrates very well with github. It is also very easy to configure: you just need to add a file called .travis.yml on the root of your repo, and travis will use it to run all the checks.

Travis supports a wide variety of languages. Setting up the environment for the supported languages is incredibly easy. For example, the following .travis.yml file will install 4 versions of ruby:

Lua, unfortunately, is not one of the supported languages, which means it requires more work. I have seen lots of people going this route:

This solution works. But there are several things I don’t like. install_lua.sh is usually a big file written in shellscript, usually several hundreds lines of code, which require maintenance. It also must be included on each repo which uses this approach for CI.

Fortunately, a better solution was presented to me. And it came from an unlikely place: Python!

There is this Python project called hererocks: https://github.com/mpeterv/hererocks. Hererocks is a python script which can install any of the major versions of Lua and LuaJIT in a folder, with no “global” dependencies. It’s maintained by Peter Melnichenko, and since Python is supported by travis, we can set up the environment like this:

What this does is: since Python is supported by travis, we can set it up in the language section. This makes Python’s package manager, pip, available. Then we use pip to install hererocks. And then we use hererocks to install the version of Lua which is required for each job in a folder called lua_install.

As I said before, specs are “extra code which makes sure that your regular code works as you think it should”. A usual term to refer to them is automated tests. I prefer specs because it is a bit more specific (there are lots of “tests” which can be “automated”).

To implement my specs I use the library busted, by olivinelabs: http://olivinelabs.com/busted/ .

A quick taste of how specs look like in busted. Here’s an extremely simple Lua library:

And here’s how we could write the spec for that library in busted:

busted declares several global variables: describe makes groups of specs. it creates one spec. assert is monkeypatched so in addition of its usual role it can be used to specify assertions. When these assertions are met, the specs containing them are passed (green). If any assertion on a spec “fails”, the spec becomes “failed” (red).

Here’s how you install & execute busted in travis.yml:

The --verbose option gives a little more information when a spec fails.

Just by adding this to your .travis.yml, you should be able to “run your specs” through Travis. It integrates with github, and will give you some niceties if you use it as a platform: it will run the specs automatically every time anyone pushes code to any of the branches, or sends a pull request. It will also mark all the commits and pull requests with a green flag (when the specs pass) or a red cross (when they don’t). 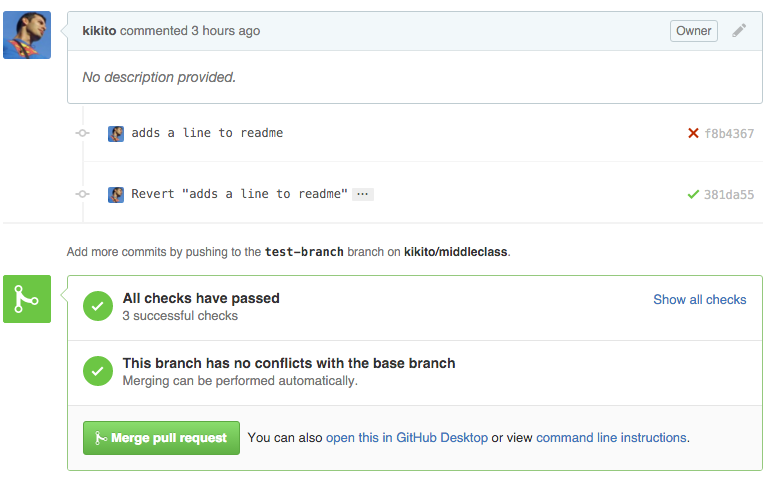 Now that you have code which tests that your code does what you think it should do. What else is there?

One of the things that you can do is getting the coverage of your specs.

Coverage is a number - usually a percentage. It tells you how many of your lines where executed when the specs were run. So, if coverage is 100%, that means that all the lines in your code have been executed at least once. If your coverage is 50%, only half of your where executed. Etc.

A tool which I find really useful is the coveralls.io website. It is not a coverage calculation tool. But once you get your coverage data to it, it can present it in a very human-friendly way. And it doesn’t limit itself to showing a single number; it presents multiple reports, per build, job, file and line. That last one is the one which I like the most: 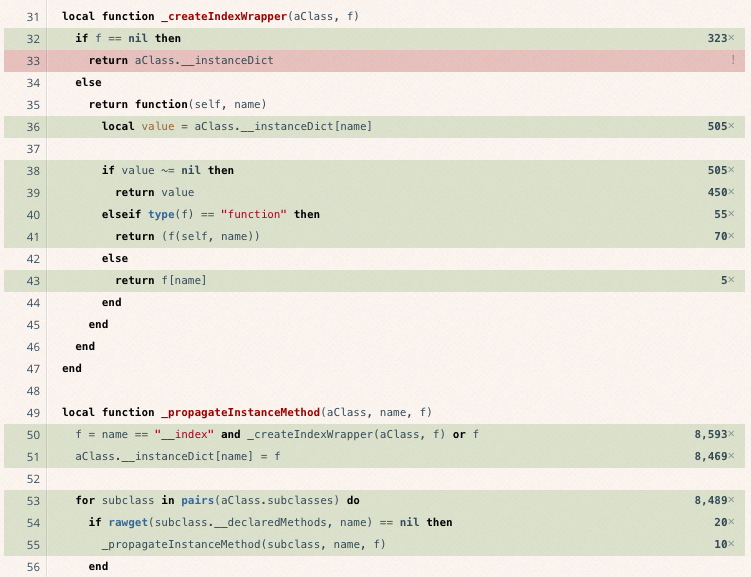 The picture above is coveralls.io showing the source code of one of my libraries, middleclass.

In addition to all the reports, coveralls.io also has “github hooks” - it will “turn red” the pull requests which lower the coverage, and “green” the ones which make it bigger (or the same).

So, how do we get the coverage info appearing in coveralls.io? In my case, I generate that info in travis, and then upload it to coveralls.

The standard Lua tool for generating coverage information is Luacov. Luacov can be used to generate a file with almost all the information coveralls.io needs. A second tool, called luacov-coveralls, translates this local file into a format coveralls understands, and does the upload.

Both luacov and luacov-coveralls are installable via luarocks, so setting them up in travis is very simple. We do something similar to this:

Once we have the local file generated by luacov, sending it to coveralls is also very easy. Since I want to send the coverage information only when the specs run correctly, I call luacov-coveralls on the after_success section of .travis.yml:

Notice that I add a -e parameter to luacov-coveralls. This makes it ignore anything happening inside the lua_install folder. If I didn’t do this, the coverage information would include busted’s source code, too. This is only necessary because I am using hererocks to set up the environment.

The only missing part is generating the luacov file. It turns out that busted already has a command-line option for it, called --coverage. Add it to busted, push the changes to travis, and it will start sending information:

If you are not using busted, luacov can also be included when runing Lua or LuaJIT from the command line. Check luacov’s documentation for more information.

Contrarily to specs or coverage studies, Static Analysis occurs *without executing the code it analyzes. It turns out that lots of useful information can be extracted from the source code by just reading it.

For static analysis, I use luacheck. This great tool detects common defects in Lua code:

Luacheck can be installed with luarocks and executed from the command line. Adding it to travis is straightforward (I run it before I run the specs, on the script namespace):

The only interesting bit is the --std option. The value max means “accept all the global variables which are used in any Lua version”. This means that pairs, ipairs, etc will not be detected as variables. But so will pack (even if it isn’t a global variable in Lua 5.3) or jit (even if it’s not available in vanilla Lua). If you want to detect global variables with more detail, you might want to change this setting by a value adapted to your environment. The +busted part adds the global variables declared by busted (like describe or it).

Here’s the complete .travis.yml I use in my projects now:

It’s worth noting that I use this file as a template; each project might require some customization (deactivating one luacheck rule here, removing an unsupported Lua version there). I encourage you to adapt it to your needs.

Thanks for reading, and happy hacking!